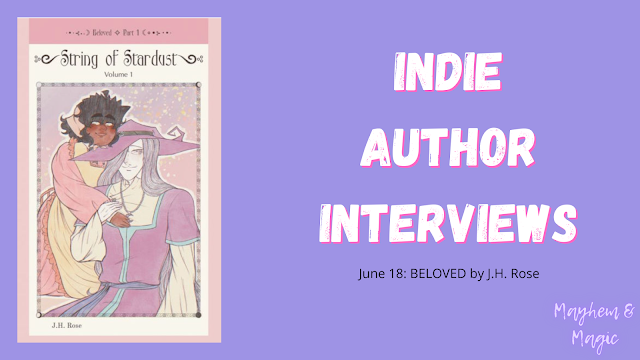 Hello hello! This week, I've got another interview for ya! Last week I chatted with J.H. Rose, author of the String of Stardust series -- the first book of which is available now! I had a great time talking with James about his series and the joys of writing. Let's get into it!

Talli: Okay, so, we’ll start with an intro! What do you write, what’s your favorite genre to write, and what are some other hobbies you have?

James: I mostly write fantasy romance! The exact flavor, however, varies—the part I'm currently writing is more like a fairy tale, and very Studio Ghibli-esque, but eventually the series will branch out into urban fantasy, before finally settling on post-apocalyptic science fantasy.
I think the thing I love most about writing is the ability to step into a different world, one that you can both use as a comfort, but also as a way to deal with reality. I find myself often trying to make sense of both myself and life through my work, and I really enjoy doing that in a way that's so enjoyable.

Talli: Ooh I love that genre variety! And I am so here for the Studio Ghibli vibes. I'm excited to see how this all plays out when I start Beloved! Also, I absolutely agree. I use writing for the same things, and often placing elements of reality in fiction, especially in fantasy, makes real-world shit easier to cope with. I also enjoy doing that!

So on the topic of Beloved, how long has this book and series been in your life? What first sparked the idea for String of Stardust?

James: Over a decade now! I can't remember precisely when I first began creating what's now Beloved, although it was around early 2010. The idea for what would become String of Stardust came in waves. The characters themselves existed years before I knew precisely what to do with them, and were inspired by...too many Vocaloid songs to list, of all things. The core plot was developed a few years later, when I learned about the concept of reincarnation. I realized all the different stories you could create utilizing it as a concept, but I'm still not sure how exactly how the base plot came into being. xD

Talli: That's such a long time, wow!! That is awesome. Is there anything specific that kept you committed to that story? Like what about it made you stick with it when it was just a bundle of loose ideas?

James: I wish I had a good answer for that, but I'm not entirely sure? I just became very attached to the few characters I had, particularly Hikaru, Suzette, and their relationship. I spent a lot of my childhood looking for that; I've more or less always wanted to be a writer, but most stories I tried to write I quickly lost passion for. When I finally created some characters I loved, even though I was young and had no idea what the hell I was doing, I just didn't want to let them go. So I kept hammering it out until I finally had something.

Talli: That's totally valid!!! And this is making me smile bc I had a similar experience when I started out writing :'') My characters have always been my driving force in my writing too.

So shifting gears a bit, let's talk about publishing! It's a hot mess! It's really freakin hard! However, in your opinion, what has been the most rewarding aspect of publishing your book?

James: Hearing others' thoughts on it! For a long time I kept my work largely private, and even now I struggle to find confidence a lot—but when I see other people enjoying this silly thing I've put so much of my time and love into, it's the best feeling in the world.

Talli: FELT THAT!! It truly never gets old :’’) like I know we write for ourselves, not for anyone else, but it's still so nice when readers go out of their way to tell us how they felt about our books. Sometimes ya just need the validation lol

So what's next for you? What's on the horizon? Anything you can hint at?

James: Currently I'm working on the second volume of String of Stardust! I'm quite excited for it; although it's a continuation of the first volume's story, it's quite different in a lot of ways—the scope of the world is expanded greatly, and there's many more hints that everything isn't *precisely* how it seems.

Talli: Ooohhh that's so exciting!!!! Sounds ominous, like you might break some hearts! But yay!! I look forward to seeing it!!

Thanks so much for chatting, James!

James: Thank you, it was fun!

If you're interested, Beloved, first volume of String of Stardust, is available now! You can find it through Amazon and B&N, as well as other retailers, but you can also read it for free on James's website, here. There's also gorgeous character art and other fun stuff about the series on the website!

I read the first chapter of Beloved a few days ago, and already I'm enthralled with James's writing; it's absolutely gorgeous. I'm telling myself I have to finish at least one of the like six books I'm currently reading before I can dive into another, but let me tell ya, waiting to continue this one is going to be hard. I better get reading lmao.

That's all for today! See y'all next week!! 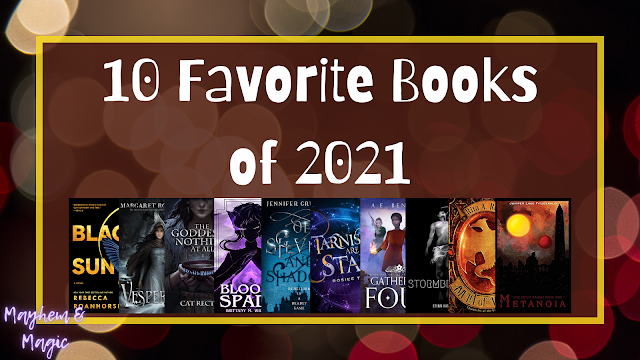 Hello hello! It's been a while, but since the year is coming to a close and everyone else is making these lists, I thought I'd jump on the bandwagon too! I never could resist a trend.  Somehow, despite being in a terrible reading slump for half of 2021, I read a total of 75 books this year. That is bonkers. Choosing just ten big faves out of that whole list was tough, but here we go! In no particular order...  Talli's 10 Favorite Reads of 2021 1. BLACK SUN by Rebecca Roanhorse This was the book that broke my reading slump, and it is easily one of the best fantasy novels I have ever read. It's simply excellent. 2. OF SILVER AND SHADOW by Jennifer Gruenke The ensemble cast in this book is just *chef's kiss.* Firecracker characters wrapped up in a twisty plot - what's not to love?  3. AMULET OF WISHES by Rita A. Rubin This book was an instant favorite, and is everything I love in a high fantasy adventure. With a fabulous cast and intricate worldbuilding, it reads 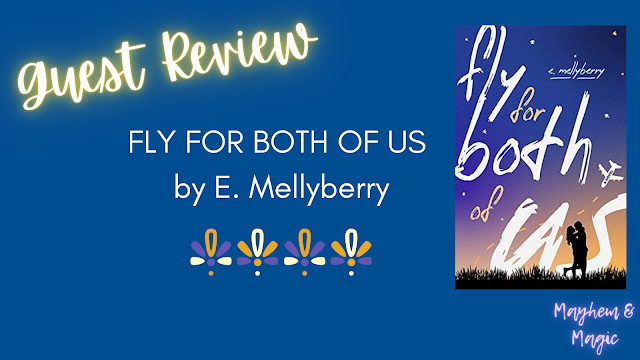 Guest Reviewer: Laura on FLY FOR BOTH OF US by E. Mellyberry

Hello hello! Today I have the our very first guest review post! In case you missed it, I am now inviting all book bloggers, Goodreads reviewers, and any readers who enjoy indie books to submit a review (new or old) to be featured here on my blog. More info about that here on my website .  Laura (@spooks_laura on twitter) kindly submitted their review of Fly For Both of Us by E. Mellyberry, which sounds like a simply delightful story! Here's what they had to say: Fly For Both of Us is a romance spanning over the course of a few years, from when the characters are 15-16 to 21. It features a British Indian character and a Chinese character. It deals with grief, loss, eating disorder, figuring yourself out and sacrifices. It was such a beautifully heartbreaking story. The characters had a lot of chemistry and I loved them as a couple. Ben's family was a delight, Kailendra herself was so fun and the book is told through dual POV, which i just think is superior tbh. The fir 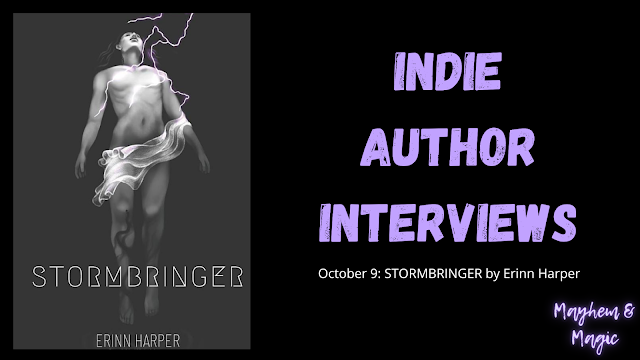 Hello hello! Today I'm sharing an interview with Erinn Harper, author of the Dreamwalker series. I read Erinn's debut, Stormbringer , earlier this year and loved it, so I was excited to learn more about her series, the inspiration for it, and what's coming up next! Read on for our conversation.   *** Talli : This is excellent timing that we're doing this the same day you got your print proof of Stormbringer , because seeing that made me HYPED for HALFSLEEPER! But more on that in a minute! First I like to start with a short intro of yourself and your writing! Erinn : Well, as you already know, I'm a queer author who focuses on queer fantasy (with sprinkles of other genres, I suppose). I tend to lean toward dark and gritty stories because that's my jam and it helps me untangle some of the messier thoughts inhabiting my brain. I've been writing for about fifteen years but have never published anything until this year...with my debut, Stormbringer , and HALFSL